After a full day yesterday, students enjoyed an early morning bus ride from Boston to New York City. Many chose to sleep most of the ride and others listened to music or read. Upon arriving in “The City that Never Sleeps” (AKA: New York City), the group stopped at the Westfield mall for lunch and then headed to the 9-11 memorial and the new One World Observatory. After checking into the hotel, everyone headed out to dinner and then a stop for photos at the iconic Times Square.

After arriving in NYC, students had a chance to grab lunch at one of the newest shopping centers in the area. The Westfield mall is a new building replacing the old shopping mall inside one of the Twin Towers. The 365,000 square foot building makes this mall the largest in Manhattan.

Nearly 17 years ago, the United States of America faced a terrifying event as terrorists crashed two planes into the Twin Towers of the World Trade Center. On September 11, 2001 nearly 3,000 innocent people were killed on American soil. Today, SEI students spent time at the stunning 9/11 memorial, remembering the lives of these victims. The twin reflecting pools of the memorial are each nearly an acre in size and feature the largest manmade waterfalls in North America. The pools sit exactly where the Twin Towers once stood. Many of the SEI students had never heard of this important piece of American history, and others were keenly interested to visit a place that they had only studied about in history books.

Students encountered a 9-11 survivor, George, who was on the 48th floor when the first plane crashed into the north building.

After visiting the memorial, staff and students got to take a ride in one of the fastest elevators in the world, travelling 102 floors in just 47 seconds. Upon arriving at the top of the One World Observatory, we enjoyed the stunning 360-degree panoramic views of New York City.

Times Square is a major commercial intersection, tourist destination, entertainment center, and neighborhood in the midtown Manhattan section of New York City. Brightly adorned with billboards and advertisements, Times Square is one of the most popular tourist destinations in the world, hosting over 300,000 tourists each day. SEI students enjoyed exploring the city and finally getting to eat authentic Chinese food, as well as trying New York style slices of pizza. 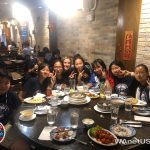 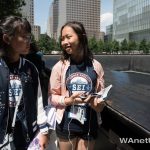 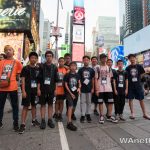 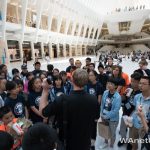